Tail Topia > About Us > Staff 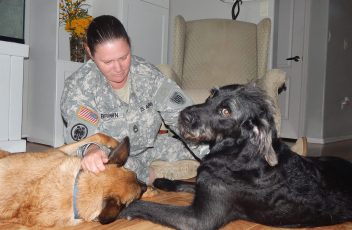 Nicole Brown and her husband Irwin are both Army Veterans, Irwin served 8 years before making the transition into the civilian world.  Nicole retired after 25 years of both active duty and reserves. She has been working at animal facilities since she was 14, back in NH. During her time in the Army she was a pet foster parent for many rescues and specialized in taking in dogs with behavioral and medical issues. Nicole opened and managed a boarding facility for the Army at Ft Meade, MD, where she did training and grooming. She has been grooming show dogs since she was a teenager. She is a Vet tech and worked in a mixed animal practice for years before taking the position as a shelter director for the Washington DC Humane Society. When Nicole is not working, she is dedicated to maintaining and caring for her small farm. She firmly believes in treating your pets like her own and is committed to providing the best care possible for them.